Consider the version of the emergence of man-made hills in the territory of modern Lithuania.

These hills, scattered throughout the country, are called pilakalnis in Lithuanian, which should be translated as "castle mountain", i.e. the mountain on which the castle stood.

Indeed, in the Middle Ages, castles, outposts and settlements stood on these pilakalnis. But where did they come from and who poured these hills, history is silent. Therefore, we are now interested in the much deeper past of these hills.

There is a version that pilakalnis existed on the territory of Lithuania BEFORE they began to build castles, houses, etc. on them. tribes of the Balts (or Probalts). And the Balts were only completing the already existing artificial hills.

This is especially clear if you look at the hills in Kernave, which are located close to each other. So close to the Scandinavian proto-Vikings were usually burial mounds.

To build a fortress, it would be more logical to fill one hill than to produce several nearby.

Not a single fortress was ever built from several towers separated by abysses.

But the burial mounds of the Megalithic era in Britain or the Proto-Vikings in Denmark are located right next to each other. As in Kernave. 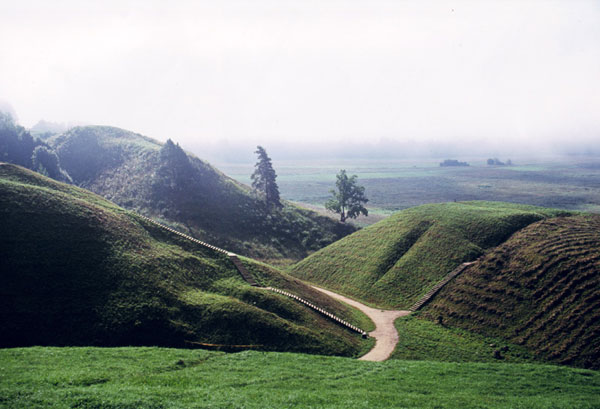 In order to build pilakalnis like Kernave (or any other Lithuanian pilakalnis), more than a hundred people need to work for many months, if we calculate labor productivity based on the hills built by the Vikings in Denmark. (A hill 40m high was built by 150 people for 4 months.)

But to gather so many people to build the castle hill, and then repeat it 800-1000 times (this is how many pilakalnis, according to various sources, there are in Lithuania) in sparsely populated (what then, what now) Lithuania would be quite difficult.

It is more logical to assume that the pilakalnis were built in two stages. One of these stages happened between the 40th century BC. until about the 1st century BC

And the second came at a later time from the 6th to the 11th century A.D.

Later, the culture of burial mounds and megaliths disappeared, was erased and forgotten, and the mounds were well rammed by time and climate and began to represent convenient heights for the construction of fortresses and defensive towers. And at the second stage, the hills were filled up, built up and fortifications were located on them.

Let's try to look into the past of pilakalnis and look at the first stage of their creation.

There are two options that can complement each other, not excluding the fact that some pilakalnis were entirely built by the Balts.

A part may have been built by British tribes who lived in the era of the megaliths and traded amber with the Finno-Ugric or Proto-Balts.

This is may be and both the borrowing and the result of some British settlement.

At the same time, the megaliths could not be above-ground, following the example of Stonehenge, but other.

Such megaliths were built, and then covered with earth and sod, turning into a crypt, a tomb, a family grave.

This type of megalithic structures is typical for 4000-2000 years. BC. In plan, they have axial symmetry and consist of rows of chambers covered with mounds. The ones closest to Lithuania are located in the north of Poland, in Pomerania.

If there was not enough stone, then such structures could be made of logs.

At the same time, the height of the fill layer was quite significant.

A little later than the Megalithic era, similar hills were built by the proto-Vikings. Building a hill over the funeral pyre.

Of course, if the pro-British were able to swim to the modern territory of Lithuania, then for the proto-Vikings who reached the Arab lands, Greenland or the Caspian, it was “just near”.

Of course, invading by raiding or sailing on a trade mission, blazing new paths, making up an embassy or a temporary settlement, and pro-British and proto-Vikings on the way, in the process of living in a settlement or in battle, were sick and died. And they were buried along the banks of the rivers in the burial mounds.

The funeral rite of the proto-Vikings, like the Vikings, was inextricably linked with the idea of ​​the ship of the dead. The body of the deceased was cremated, sometimes together with the boat, after which a mound was poured over it.

Now take a look at the picture where the pilakalnis is photographed from above ... 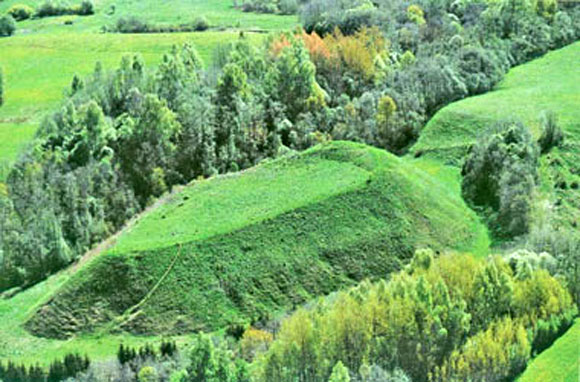 The oldest known proto-Viking burial mounds today date from 1300 BC.

For thousands of years, the height of the hill has been reduced by shrinkage, compaction, weathering and water erosion.

The hills in Kernave, which stand on the banks of the river, are very suitable for such hills for the lost leaders or Viking warriors. You didn't even need to settle down for this. Death could have occurred during the campaign, and require a rite.

It takes about 150 people and 4 months to build the hill. This is a lot and long, but it is less than 7 proto-Viking ships (22 people per ship). And if there are 14 ships, then the period is 2 months. Is quite real. At the same time, the proto-Vikings had hundreds of ships, and they did go on an expedition together.

Then the proto-Vikings left, and the area with the burial hills was empty for about 1000 years.

People forgot about the meaning of these hills, and when the new Baltic tribes needed to build fortresses, castles, etc., such hills turned out to be very convenient for completing and placing buildings.

The same fate turned out to be at the hills piled over the British megaliths in the territory of modern Lithuania.

Thus, if you excavate under the pilakalnis, building tunnels to the center of its axis, you can find either megaliths and burials, or wooden crypts, or the remains of funeral pyres, charred bones and molten armor, weapons and utensils.

As a preliminary, you can try scanning pilakalnis using the method (as lidar) used several years ago to scan the area around Stonehenge. This method allows you to find prints of old pillars, etc. without excavating. Sometimes this is even more accurate than excavation.

In any case, in order to find something, you must first know what to look for and where to look.

You can contact the author of the article using our editorial mail
(see the Contacts section at the bottom of the main page).