For a point of reference in the economy for a long time understood «the Wealth of Nations» by Adam Smith. In modern science, this point was transformed into GDP - Gross Domestic Product.

On the other hand, the benchmark in monetarism (Milton Friedman) and the Austrian School of Economics (Ludwig Heinrich Edler von Mises, Friedrich August von Hayek) is freedom. Economic and political freedom.

The third fashionable point at present is the concept of “The Happy Planet Index”.

Thus, there is no single point of reference.

Nevertheless, this point is easy enough to detect if you understand the basic principles of building a modern post-industrial democratic society. If you understand what is common in these models. Where is their common starting point.

The modern economic system, as well as the modern democratic system, were not created for themselves. They are made for people. And that means not a person for the state, but a state for a person. Laws are not to limit human freedoms, but to ensure respect for the rights and freedoms of each person, laws to increase the happiness and wealth of a person. Not GDP, but the wealth of each individual.

States are made up of people. No people - no state. Poor people are a poor state.

Wealth, happiness, human freedom - is the area of respect for his rights.

Thus, a common unifying point in economic and political reasoning and theories is in the field of human rights.

And if human rights are fully respected, then happiness arises, “the Wealth of Nations”, the country's GPD grows, economic freedoms arise.

What is human rights? There is a Universal Declaration of Human Rights, created in 1948. You can take as a basis at least her. Although in my opinion, many provisions of this Declaration do not fully provide for human rights and freedoms. But it is still better than nothing.

You can also be guided by the words of Thomas Jefferson from the United States Declaration of Independence, stating that «they couldn’t endowed,». " These words are much broader than the provisions of the declaration of human rights and, from my point of view, more precisely.

If we take human rights as a reference point, then the answers to many sensitive questions of modern economics and politics will become obvious. And it will become clear in which direction to solve them, what should be the vector for solving these issues, in full accordance with the concern for GPD, economic freedoms, human happiness and the wealth of nations.

For example, the right to life implies the right to protection of life and health, as well as the right to die. This implies the need to legalize the sale of self-defense weapons, legalize euthanasia, legalize drugs, simplify and even cancel certification of medicines, medical institutions, prescriptions, etc. (see Milton Friedman about FDA).

A person should have the right independently and freely to choose what, how and from whom to be treated. How to protect your life and health. Freely choose a healthy lifestyle or death from legal tobacco, razors, ropes or alcohol, and illegal (so far) drugs, pistols, euthanasia. *

The right to work implies, for example, the legalization of prostitution, which will also ensure the people of this profession the right to life and health. *

The right to work, the right to freedom of movement requires the maximum mitigation of immigration legislation. *

Are these rights and freedoms associated with the wealth of nations, the growth of GDP? Of course. Legalization of weapons, drugs, prostitution, immigration, the abolition of certification and licensing reduce the budget costs for the police and other services, and thus save taxpayers money. Reducing budget expenditures makes it possible to reduce taxes and thus make every taxpayer richer and happier. *

Legalization of the above makes it legitimate to many businesses and incomes, which leads to a decrease in criminal money and undermines the economic basis of crime. This means it reduces budget costs. *

As a result, people are rich and happy, GDP increases, budget revenues grow, turning into additional benefits for people, for example, in the form of unconditional income.

With full respect for human rights, all economic actors benefit. Therefore, human rights are the main point of reference for the modern economy.

* Detailed argumentation of the stated theses is given in Andrei Sokolov’s book, Economics and Human Rights. 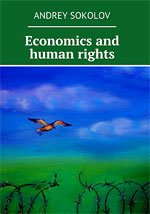