How did borders come about?

How did borders come about?

As soon as the first states appeared, they began to inflate like balloons until they burst or ran into another balloon of another country - on the border.

The empire of Alexander the Great burst into ruin, making all the results of his wars and conquests equal to zero. Those. all his wars were in vain. All the civilians and soldiers who died in these wars did not create a large country. Almost immediately after the death of this conqueror, his possessions were again divided into separate states.

The same fate befell the empire of Genghis Khan, the Mongol conqueror.

When the ball of the Roman Empire burst, Europe was divided into many small states and plunged into the Middle Ages, forgetting scientific discoveries, forgetting how to read and write, destroying examples of art created by artists of the past.

From a small needle of hundreds of Spanish knights, the ball of the Aztec empire burst.

In the last century, the balls of the Ottoman, Austro-Hungarian and British empires burst.

Swelling and flooding everything around with blood, the balls of the German and Japanese empires burst.

The Russian empire, from which the Bolsheviks released air in 1917, shrank in size, but survived, turning into the empire of the USSR. But this empire did not last long either. In 1991, the inhabitants themselves pierced the ball, and the empire almost halved in size.

Almost the first thing the USSR did after the establishment of the Bolsheviks in it was to close the borders. The inhabitants of the country could no longer leave it. Those who tried to do this without permission faced prison, and sometimes death.

Outside, from abroad, it was also very difficult to get to the USSR. And not only people, but also books, goods, knowledge and information. The USSR needed the border in order to fully and completely control the lives of its citizens. Their thoughts, dreams, desires, incomes, knowledge and rest. 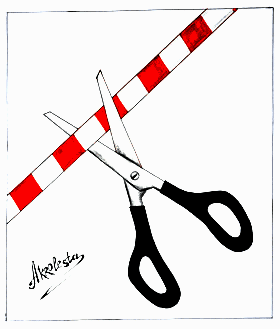 Now let's look at the EU countries - France, Germany, Poland, Italy, Czech Republic and others. There are more than 20 of these countries. They speak different languages, these countries have different laws, in the past they often fought with each other, and often this happened precisely because of finding out where the border should pass and to whom which lands belong.

And now the borders in Europe have remained only in the form of road signs and stripes on geographical maps. People, goods, knowledge easily move from one country to another and no one bothers them. In fact, there are no borders in Europe. And people began to breathe more freely.

The border is like a stranglehold on the neck - it does not allow breathing, receiving a portion of oxygen, breathing deeply, breathing in fresh air and not thinking about the fact that the loop of the border, draped over the neck, may one day tighten and suffocate.