Most of the feedback a person receives from others can be divided into two large groups: negative and positive.

Negative - this is a message about shortcomings, swearing, "assaults" and any other "negative", in the everyday sense referred to as "criticism".

We react to any feedback, first of all, emotionally. And since negative reviews happen quite often, our reactions may well end in depression and "clipped wings."

Most of the negative reviews, in fact, have a rather primitive meaning - "don't stick your head out", "you are not worthy", "be like everyone else", "don't show off" and in general "stop doing stupid things."

In fact, behind all these reviews is a rather primitive and banal manipulation, the purpose of which is at least to belittle the achievement, and as a maximum to rise at the expense of humiliating and insulting another person.

Those who allow themselves such statements experience a subconscious inferiority complex, which generates aggression in them, which they direct at others, at those who do and create something.

In the philistine understanding, this is criticism, but in fact it has nothing to do with criticism, but is at the level of insults. And it almost always focuses on the personality of the author, and not on what he has done or is about to do. Or very quickly passes from work to "personality".

Such criticism, for example, can highlight an unsuccessful turnover or word in the text, a specific defect in a drawing, a specific area in a painting. As a result, you can benefit from this criticism and improve your performance.

Can you spare your nerves and get the most out of both negative and positive reviews?

To do this, you need to accustom yourself to perceive them in different ways.

Negative reviews need to be analyzed. Ideally, pulling back a little and looking as if from the side. This will reduce the emotional component of perception.

Analyzing a negative review, one can discover stupidity or incompetence of the critic. You can identify the real motives that move him. And more often than not, you should understand that you need to stay away from this person so that he does not splash you with his anger, envy and abuse.

Occasionally, when faced with analytical and constructive criticism of the "mentor", you can get a lot of benefit from it. Therefore, it is important not to dismiss negative reviews, but to analyze them.

As for the positive reviews, there is no need to analyze anything. Here it is permissible to completely surrender to emotions and euphoria and savor the praise like ice cream, like a delicious delicacy, like something that brings sensual and emotional pleasure.

It is useful to memorize positive reviews and periodically recall them in order to enjoy them again and again, gaining self-confidence and getting a boost of energy for new achievements. 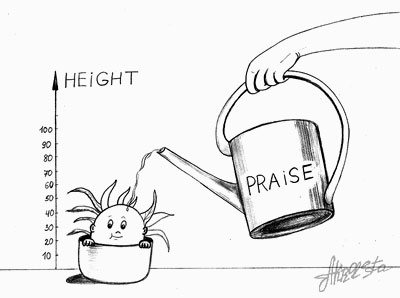