Everybody makes mistakes and has made mistakes. You, your parents and teachers, presidents and cashiers, drivers and police officers, judges and customers. Even the authors of this book have made and are making mistakes. Mistakes always occur when a person encounters something new or learns a new skill. The child falls many times before learning to walk. Before cycling, you have to make a few unsuccessful attempts. Before inventing the light bulb, Edison made 10 thousand mistakes - unsuccessful attempts, experiments.

Finding ourselves in unfamiliar terrain, we can get the wrong route. Once in a new country - to be mistaken with the rules of politeness. Having started to study a new subject - making mistakes when completing assignments.

Mistakes are not a message about your state of mind. Mistakes are stepping stones to knowledge and success.

During the entire existence of people, there was not a single person who did not make mistakes.

A mistake is not a tragedy. The error just needs to be corrected.

Making mistakes hurts. It doesn't matter whether it is physical pain when falling off a bike or chagrin from an error in solving a math problem. 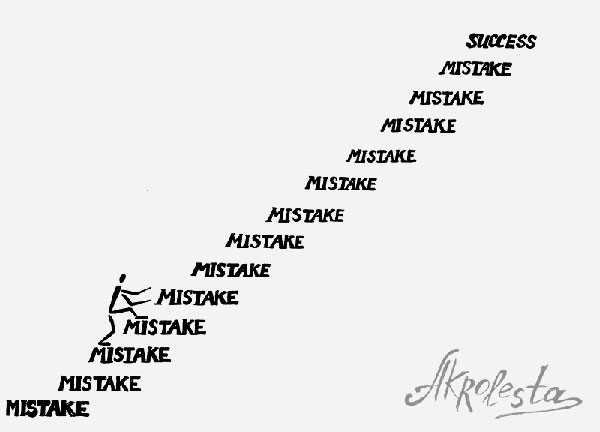 People are afraid of pain, afraid of making a mistake. And this fear often stops them from doing good deeds, gaining knowledge, changing their lives, changing the world around them. And by not doing something out of fear, people often make another mistake - the mistake of inaction.

Fear can be useful and can save life and health when it stops a person from a dangerous action: walking along dark alleys, crossing the road at a red light or in the wrong place. Fear is useful as a warning to be careful with a knife, ax, gas stove, or power tool. Fear reminds us to lock the door in our apartment.

But it happens that fear becomes harmful. After all, fear prevents us from approaching and meeting an interesting person, going to a new circle, getting a good job. Fear prevents you from choosing a profession and enrolling in the educational institution you want. After all, fear whispers: “What if it doesn’t work out”, “What if they laugh”, “What if it breaks the tradition”. And by obeying this whisper, a person deprives himself of the chance to find friends and meet love, learn new things, master an additional skill, get a favorite profession, start an interesting business, and become the star of his own life.

If you follow the whisper, life will turn out to be gray and boring. A person who succumbed to his fears sooner or later begins to quietly hate happy and successful people, people who did not obey their fear and took the risk of taking a step, and then another and many more steps towards their dreams.