From the point of view of scientists, love, as a feeling, as a sensation, begins with the production of hormones of pleasure in response to visual, auditory or olfactory impressions received by the lover from the object of passion. Everything is like animals. The only difference is that animals have olfactory impressions, i.e. the smell of a male or female plays a much more important role than how an object looks or what sounds it makes.

The human sense of smell is much worse than that of animals and we are not aware of most of the smells of other people. But it is these smells that protect us from falling in love and mating with close relatives - their smell is similar to ours and our brain does not like it. Hormones are not produced.

The period of such "hormonal" love lasts about one and a half years. It was at this time that lovers are capable of all sorts of recklessness and commit rash and risky acts. Everything is like animals. A "loving" male ignores the risk of hunters, predators and the risk of injury and even death in battle for a female with another male. Females also do not think about the consequences, ignoring the fact that males of many species leave the female forever immediately after mating and are not going to protect her or their offspring from the dangers.

Of course, not all male animals are so selfish. There are species that create pairs for many years, and even forever.

But what happens to couples after the "hormonal" love wears off?

Real life begins. People learn the positive and negative sides of each other, learn to respect the interests of their partner, learn to care and live together.

And this does not at all exclude the emergence of a new "hormonal love" to a stranger or the release of "love hormones" in response to some actions of a permanent partner, or for other reasons.

In humans, everything is still a little more complicated and confusing than in animals.

In addition to nutrition, survival and reproduction, a person wants to receive other pleasures. It can be knowledge, adventure, hobbies, and more. And this can both bring partners closer and distance them from each other.

You ask, what about romance. We think that there is romance too, and that love has many more components besides sounds, smells and looks. But scientists have not figured it out yet. And today this is the lot of poets.

When love enters the "non-hormonal" phase, it begins to resemble friendship, habit, cooperation, mutual concern, tenderness, finally. And this is not enough. This is a lot.

For example, our closest relatives in the wild, the great apes, also have a kind of friendship, caring, and affection. This does not prevent them from raising offspring, mating and finding food. Moreover, this behavior leads to the fact that the male refuses to fight, gets less injuries and lives longer. 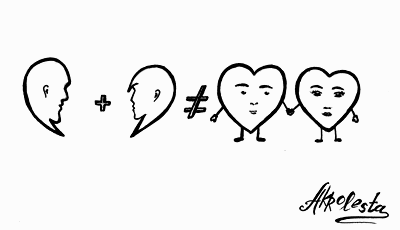