How did countries and states appear?

How did countries and states appear?

If you have ever heard of such a type of crime as the mafia or racketeering, then it will be easy for you to understand how states came to be.

If you haven't heard of such criminals before, you can simultaneously understand how racketeers work and how the state functions.

And we will start, as always, from the very beginning. Since that time, when there were no states yet, but there were separate tribes, small villages and robber bands, looking for something to profit from strangers.

There were many gangs. There were fewer villages. And it so happened that a gang came to a village that had just been robbed by another gang, and there was nothing to take in this village.

Then the most cunning bandits came up with this.

They came to the village and suggested to its inhabitants - let us protect your village from other gangs, and for this you will feed us, dress us and provide us with houses for living.

Residents, exhausted by raids and robberies of all kinds of gangs, felt that it was better to feed some bandits than to be raided by all kinds of others.

Now such offers are called racketeering and they are often used by all kinds of mafia groups.

And then there was this.

The bandits settled in one village, but gradually their appetites grew and grew. They demanded more and more food, clothing, and wealth from the villagers. They told the residents that they needed more weapons, horses and chain mail. That they need more houses and the food is sweeter. And the residents had to give the bandits what they demanded. After all, the strength was on the side of the gang.

But if you think that the gang honestly fulfilled the terms of the agreement with the residents, then you know poorly both the bandits and the state.

It so happened that one gang entered into a protection agreement with several settlements and demanded tribute from each, i.e. money, food, goods. This is how the first tax arose - on protection. And with it a primitive small state arose, ruled by the main bandit.

As time went on, the gang grew. Young and strong villagers, seeing that the bandits only eat, rob and rest, and do not bend their backs in the garden, in the field or in the forge, came to the main bandit and asked to join the gang. And soon the small gang grew into a small army. Yes, and the main bandit himself changed his nickname to a title and began to be called a king.

And this leader was always and everything was not enough. Therefore, he constantly fought with his neighbors and tried to rob them. And at the same time he robbed the inhabitants of his country, taking all the best for himself.

But one day, one cunning leader called a local priest to him and told him to tell all the inhabitants that it was he, the leader, who is the governor of God of this people in this country.

And the people believed the priest. Riots began to arise less often - people were afraid to anger their God. And the right to rule over the country began to be inherited from the leader - his son. From a son to a grandson, and so on.

But since life did not become easier for people, they again began to plot a rebellion. And sometimes to rebel and kill the leaders.

And then the rulers of states came up with a new deception. 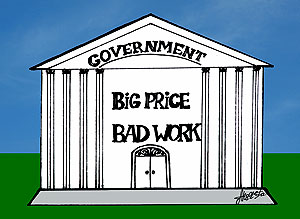 They said that they would make a gift to their people - they would teach and heal them for free, and when the residents grew old, they would feed them - pay them pensions.

True, the ruler said, for all this it will be necessary to pay an additional tribute, that is, a tax.

And the inhabitants again believed and agreed.

The leader, or rather the leaders, now there were many of them, and each commanded his own little gang - some scribes, some tax collectors, some an army, some courts, some police ... built inferior schools and poor hospitals in the country, putting most of the new taxes in their pockets or having built new palaces for themselves with this money.

They even started paying pensions to residents. They will collect 100 coins from him in his entire life for retirement, and if the resident does not die before retirement, then in old age, ten of these hundred coins are returned to him. And the rest spend on the luxurious life of their gang.

However, this gathering has long ceased to call itself a gang. Now it is called government, parliament, ministries. Although the essence has remained the same and the tribute from the residents is still regularly collected by the tax army of the former chieftain.

And the most interesting thing is that the residents still believe that the chieftain and his gang are protecting them, helping them in old age, teaching children for free and treating residents in free hospitals.

And if suddenly the chieftain and his gang have a lawyer who says that all this is not so, then he will have to answer two simple questions.

The first. Why, at all times and in all states, the first right that the authorities take away from residents is the right to use force. And first of all, self-defense.

And the second one. If the government cares so much about the inhabitants, then why does it punish even the most serious crimes, such as murder, to a much lesser extent than the slightest encroachment on the throne, on power, on the state.